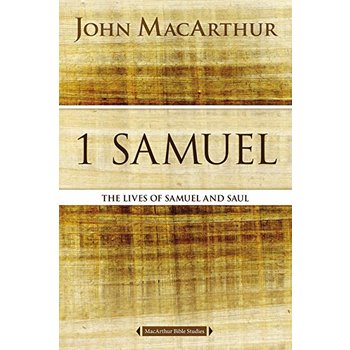 The time of the judges left Israel in a cycle of sin, oppression, repentance, and deliverance. Eventually, they decided they needed the leadership and authority of a king. They demanded that God give them a king. Samuel, God's anointed prophet, warned them this may not be in everyone's best interest. As they insisted, the Lord finally provided their first king, Saul.
Through this study, John MacArthur leads readers through an in-depth look at this historical period beginning with the miraculous birth of Samuel, Saul's crowning as Israel's first king, and ending with his tragic death. Take an in-depth look at Hannah, Eli, Saul, David, and Jonathan, as well as careful considerations of doctrinal themes such as Slaying a Giant and Respecting God's Anointed.
The MacArthur Bible Studies offer insightful examinations of the whole of Scripture. Each guide includes extensive commentary, detailed observations on over arching themes, and probing questions to help you study the Word of God with direction from John MacArthur.
Chapters include:
- Hannah's Vow (1 Samuel 1:1—2:21)
- A Visit from God (1 Samuel 3:1-21)
- The Ark Is Captured (1 Samuel 4:1—6:21)
- The Last Judge (1 Samuel 7:1-17)
- The People Demand a King (1 Samuel 8:1-22)
- Saul Comes to Power (1 Samuel 9:1—10:27)
- Saul's Failure as King (1 Samuel 13:1-15; 15:1-35)
- Transfer of Power (1 Samuel 16:1-23)
- Slaying a Giant (1 Samuel 17:1-51)
- David and Jonathan (1 Samuel 20:1-42)
- Saul's Final Days (1 Samuel 24:1-22; 28:1-20)