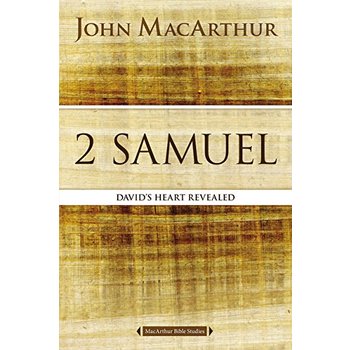 David is often considered Israel's greatest king, but he is no superhero. He had to fight many battles on the way to the throne. After becoming king, he still suffered many spiritual battles that led to his committing murder, adultery, and even bringing disaster on his family. After all, he was a man, with human weaknesses. He was far from perfect, even though he is known as a man after God's own heart. David relied on God's grace for forgiveness when he messed up, and that same grace is available to us today.
Through this study, John MacArthur takes readers through the historical period beginning with David's struggle to establish his throne, his sin and repentance, and ending with the tragic rebellion of his son Absalom. Take a closer look at Joab, Amnon, Tamar, Absalom, and more. As you work through this study you will also get a closer look at doctrinal themes such as Obedience and Blessing and being a Man After God's Own Heart.
The MacArthur Bible Studies offer insightful examinations of the whole of Scripture. Each guide includes extensive commentary, detailed observations on over arching themes, and probing questions to help you study the Word of God with direction from John MacArthur.
Chapters include:
- Uniting a Divided House (2 Samuel 2:1—3:30)
- Obedience and Blessing (2 Samuel 6:1-23)
- A Throne Established Forever (2 Samuel 7:1-29)
- Remembering Past Promises (2 Samuel 9:1-13)
- David's Acts of Sin (2 Samuel 11:1-27)
- David's Sins Are Revealed (2 Samuel 12:1-25)
- Trouble in David's House (2 Samuel 13:1-39)
- Absalom's Rebellion (2 Samuel 15:1-37)
- Absalom's Defeat (2 Samuel 18:1—19:15)
- A Second Rebellion (2 Samuel 19:16—20:26)
- The Man After God's Heart (2 Samuel 22:1—23:7)