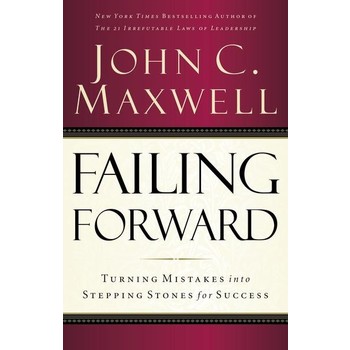 Are some people born to achieve anything they want while others struggle? Call them lucky, blessed, or possessors of the Midas touch. What is the real reason for their success? Is it family background, wealth, greater opportunities, high morals, an easy childhood?
New York Times best-selling author John C. Maxwell has the answer: The difference between average people and achieving people is their perception of and response to failure.
Most people are never prepared to deal with failure. Maxwell says that if you are like him, coming out of school, you feared it, misunderstood it, and ran away from it. But Maxwell has learned to make failure his friend, and he can teach you to do the same.
"I want to help you learn how to confidently look the prospect of failure in the eye and move forward anyway," says Maxwell. "Because in life, the question is not if you will have problems, but how you are going to deal with them. Stop failing backward and start failing forward!"
Chapters include:
- What's the Main Difference Between People Who Achieve and People Who Are Average?
Redefining Failure and Success
- Get a New Definition of Failure and Success
- If You've Failed, Are You a Failure?
- You're Too Old to Cry, but It Hurts Too Much to Laugh
- Find the Exit Off the Failure Freeway
Do You Mind Changing Your Mind?
- No Matter What Happens to You, Failure Is an Inside Job
- Is the Past Holding Your Life Hostage?
- Who Is This Person Making These Mistakes?
- Get Over Yourself--Everyone Else Has
Embracing Failure As a Friend
- Grasp the Positive Benefits of Negative Experiences
- Take a Risk--There's No Other Way to Fail Forward
- Make Failure Your Best Friend
Increasing Your Odds for Success
- Avoid the Top Ten Reasons People Fail
- The Little Difference Between Failure and Success Make a Big Difference
- It's What You Do After You Get Back Up That Counts
- Now You're Ready to Fail Forward