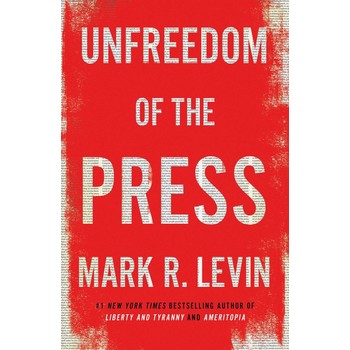 Unfreedom of the Press, by Mark R. Levin, Hardcover

Mark R. Levin, six-time #1 New York bestselling author and FOX News star, delivers a groundbreaking and enlightening book that reveals how the great tradition of the American free press has denigrated into a standardless profession that has crushed the trust of the American public, not by actions of government officials, but through its own abandonment of integrity and objective journalism.
Unfreedom of the Press is not just another book about the press. Levin reveals how those trusted with news reporting today are demolishing freedom of the press from within: “not government oppression or suppression,” he explains, "but self-censorship, group-think, bias by omission, and passing off opinion, propaganda, pseudo-events, and outright lies as news."
Levin dives deep into the historical background of American journalism to take you on a journey through the early American patriot press, which proudly promoted the principles set forth in the Declaration of Independence and the Constitution, followed by the early decades of the Republic when newspapers around the young country were open and honest about their fierce allegiance to one political party or the other.
It wasn't until the start of the Progressive Era and the twentieth century when the alleged objectivity of the press first emerged, leaving us where we are today: with a partisan party-press overwhelmingly aligned with a political ideology but hypocritically engaged in a massive untruth as to its real nature.
Chapters include:
Introduction: Unfreedom of the Press
- News as Political and Ideological Activism
- The Early Patriot Press
- The Modern Democratic Party-Press
- The Real Threat to Press Freedom
- News, Propaganda, and Pseudo-Events
- The New York Times Betrays Millions
- The Truth About Collusion, Abuse of Power, and Character
- Epilogue: A Standardless Profession