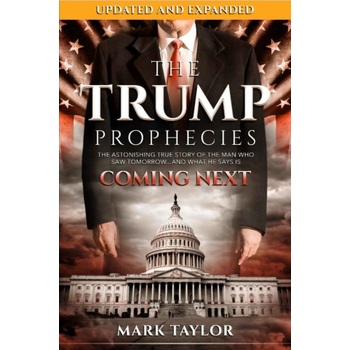 In November of 2016, as the election results rolled in, many Americans were surprised to find out that Donald Trump would be the next President of the United States of America. This news didn't come as a surprise to some. A select few already knew Trump was going to win. As the prophecy said, he was chosen for such a time as this.
Mark Taylor, a retired firefighter, is one such prophet. On April 28, 2011, in the midst of a debilitating sickness, the Holy Spirit communicated this prophecy to him. When the prophecy made its way to New York Times bestselling authors Don and Mary Colbert, God led this passionate team of individuals to lead the nation into a prayer that would spark one of the most incredible miracles of our time.
Trump's victory was just the beginning. What is coming next for this nation? Mark Taylor has more to say about that.
In The Trump Prophecies readers will learn:
- How the Lord can and will use anyone regardless of background to communicate His message to His Church
- What contributed to the miracle of the 2016 election, role of we the people for the will of God, and how the Body of Christ can keep His blessing on our nation
- How the enemy uses distraction to steer our focus away from God, and how we can overcome these patterns
- Astounding changes in our US Government that Mark sees on the horizon
- The message of hope and encouragement that uses fresh methods to spread the Gospel to the lost
Chapters include:
Part One: The Man
- Introduction: The Voice
- Firefighting
- From Fighting Fires to Fighting for My Life
- A Divine Appointment
Part Two: The Mission
- Introduction: The Rhythm
- This Day was Ordained
- Photo Finishes for Horse and Man
- Landslide
Part Three: The Message
- Introduction: The Election Was Only the Beginning
- The Modern-Day D-Day
- The Sands of Time
- America, America
- Time Is Up for Those Who Are Corrupt
- A Glorious Church, Without Spot or Wrinkle
- Conclusion: Taking Ground