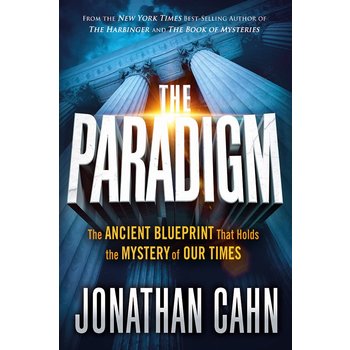 The Paradigm: The Ancient Blueprint That Holds the Mystery of Our Times, by Jonathan Cahn

Jonathan Cahn, New York Times bestselling author, ignited a storm with his book The Harbinger. Now he unleashes a book that is powerful enough to cause a stir around the world. The Paradigm may be his most compelling book yet.
- Could a blueprint from ancient times hold the secret of our times?
- Could this mystery be behind major current events?
- Could events from 3,000 years ago be dictating the news of modern times?
- Could the people who lived in this ancient template hold the mystery behind the leaders of our day?
- Could this ancient paradigm be determining major events of our times down to the date?
- Could a mystery from the Middle East predict current events more accurately than anything else?
- What does this ancient paradigm have to say about our future?
- Does it contain a warning we all must hear?
Chapters such as The Priestess, The Warrior, and The Shadow Queen will capture reader attention and take them on a journey through the Middle-Eastern landscapes to Washington, DC, from ancient palaces to the White House. Examine mysterious priests and priestesses, ruthless kings and queens, secrets and scandals, gods and goddesses, prophets and holy men, signs, portents, wonders, and harbingers. The mysteries of The Harbinger continue as they are intertwined with the mysteries that unravel in The Paradigm.
The revelation explored in The Paradigm is sure to stun, startle, confound, and amaze. Once the veil is removed, you will never see the world the same way again.