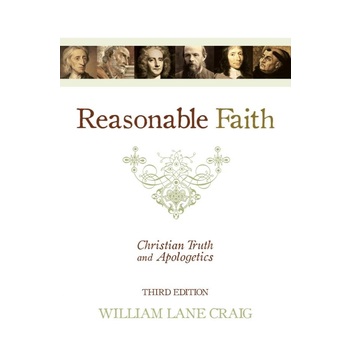 Perfect as a textbook yet excellent for lay readers, this updated edition builds a positive case for Christianity by applying the latest thought to core theological themes.

J. Gresham Machen once said, "False ideas are the greatest obstacles to the reception of the gospel"--which makes apologetics that much more important. Wanting to engage not just academics and pastors but Christian laypeople and seekers, William Lane Craig has revised and updated key sections in this third edition of his classic text to reflect the latest work in astrophysics, philosophy, probability calculus, the arguments for the existence of God, and Reformed epistemology.

His approach--that of positive apologetics--gives careful attention to crucial questions and concerns, including: the relationship of faith and reason, the existence of God, the problems of historical knowledge and miracles, the personal claims of Christ, and the historicity of the resurrection of Jesus. He shows that there is good reason to think Christianity is true. As Craig says, "If you have a sound and persuasive case for Christianity, you don't have to become an expert in comparative religions and Christian cults. A positive justification of the Christian faith automatically overwhelms all competing world views lacking an equally strong case."

"It is hard to overstate the impact that William Lane Craig has had for the cause of Christ. He is simply the finest Christian apologist of the last half century, and his academic work justifies ranking him among the top one percent of practicing philosophers in the Western world. I know him well and can say that he lives a life of integrity and lives out what he believes. I do not know of a single thinker who has done more to raise the bar of Christian scholarship in our generation than Craig. He is one of a kind and I thank God for his life and work." J. P. Moreland, Distinguished Professor of Philosophy, Talbot School of Theology

"With extraordinary erudition, Craig sketches the arguments of major thinkers of both past centuries and recent times, and he presents his own reasons for concluding that traditional Christian doctrines about God and Jesus are credible. His replies to those skeptical of the existence of God, of historical knowledge, of the occurrence of miracles, and in particular of the resurrection of Jesus, take debates over those difficult topics an important stage further. Here is an admirable defense of basic Christian faith." C. Behan McCullagh, Philosophy Program, La Trobe University

"A much-needed book for our times. It overflows with cogent and compelling argument presented in accessible and irenic language. University and seminary students will find this book especially helpful in exposing the fallacies and lack of evidence in the many and various challenges that have been leveled against historic Christian claims. I highly recommend this book." Craig A. Evans, Payzant Distinguished Professor of New Testament, Acadia Divinity College; author, Fabricating Jesus: How Modern Scholars Distort the Gospels

"Although my philosophical predilections often differ from Dr. Craig's (as they do from those of everyone else I know), I have found that he is very knowledgeable about science and current cosmological ideas. He provides interesting insights into their implications for our shared Christian beliefs." Don Nelson Page, Professor of Physics, University of Alberta