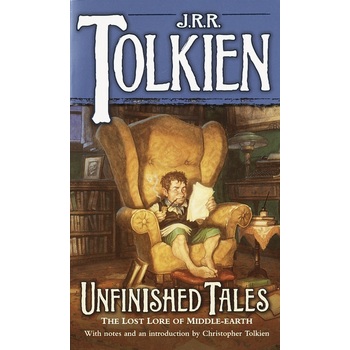 Discover mythic lore and forgotten legends unearthed by Christopher Tolkien from his father's archives. Dig into never-before-told stories of the three ages of Middle-earth.
In the First Age, you will learn about lord Turin escaping Morgoth's forces, disguising himself as an outlaw, and plotting his chance to avenge his people against the evil that had razed his home. However, Turin lived under the curse of a hateful dragon, and his secret identity hid more than he knew.
In the Second Age, you will witness the divided love of Prince Aldarion. His heart belonged to Erendis, but his passion was with the ocean, and the great ships that sailed beyond the sight of land. No man can serve two mistresses, and no mortal's love could withstand the lure of the sea.
In the Third Age, you will witness more back story and history of the One Ring. The great warrior Isildur escaped with the One Ring, cut from the Dark Lord Sauron’s hand, to hide it from Evil’s grasp. Isildur must learn the burden of a ringbearer—and of its temptation and despair.
Chapters include:
Part One: the First Age
- Of Tuor and His Coming to Gondolin
- Narn I Hin Hurin
Part Two: the Second Age
- A Description of the Island of Numenor
- Aldarion and Erendis
- The Line of Elros: Kings of Numenor
- The History of Galadriel and Celeborn
Part Three: The Third Age
- The Disaster of the Gladden Fields
- Cirion and Eorl and the Friendship of Gondor and Roahn
- The Quest of Erebor
- The Hunt for the Ring
- The Battles of the Fords of Isen
Part Four
- The Druedain
- The Istari
- The Palantiri