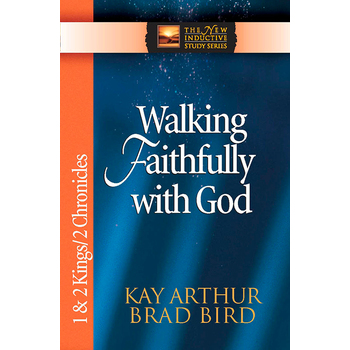 The nation of Israel faced many ups and downs due to the determination and faithfulness of its various leaders. Throughout the books of Kings and Chronicles we see many changes in the spiritual landscape of Israel as leaders rise and fall. As you study these books of the Bible, you will see the true meaning of success and how to find it. Find inspiration in the passion of the prophets and kings who were determined to bring restoration and revival to their land.
Previously published as Come Walk In My Ways.
Kay Arthur's insightful New Inductive Study Series is a bestselling Bible study series. Readers will face the truth of God's precepts, promises, and purposes by devoting just a few minutes to study each day.
Chapters Include:
- First Kings: Introduction
- Week One: How Can You Have Success Every Way You Turn?
- Week Two: Where Is God's Temple Now?
- Week Three: Whose Influence Are You Following?
- Week Four: How Long-Suffering Is God in the Face of the Disobedience of His People?
- Week Five: Are You Prepared to Fight by God's Rules for Warfare?
- Second Kings: Introduction
- Week One: When God Speaks, It Will Be "According to the Word of the Lord"
- Week Two: Have You Destroyed the High Places of Your Past?
- Week Three: Are You Following in the Footsteps of Your Predecessors or Your Kings?
- Week Four: If God Is God, Why Do We Sometimes Serve Him Halfheartedly?
- Week Five: What Does It Take to Make Us Understand the Consequences of Our Sin?
- Week Six: The Time of War
- Week Seven: Are You Walking In All His Ways?
- Week Eight: What Does It Take for God to Get Our Attention?