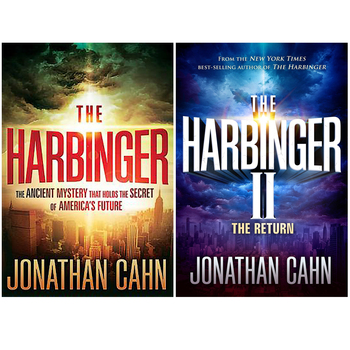 The Harbinger I & II, by Jonathan Cahn, Paperback Set

Jonathan Cahn shocked the world with his prophetic discoveries rooted in Scripture. Discover what the ancient mystery he unravels in The Harbinger and The Harbinger II, now available together in one set.

Is it possible...That there exists an ancient mystery that holds the secret of America's future? That this mystery is behind everything from 9/11 to the collapse of the global economy? That God is now sending a prophetic message on which America's future hangs?

Before its end as a nation, there appeared in ancient Israel a series of specific omens and signs warning of destruction. These same Nine Harbingers are now manifesting in America with profound ramifications for America's future and end-time prophecy. Hidden in an ancient biblical verse from the Book of Isaiah, the mysteries revealed in The Harbinger are so precise that they foretell recent American events down to the exact days... the 3,000-year-old mystery that revealed the exact date of the stock market collapse of 2008... the ancient prophecy that was proclaimed from the floor of the US Senate and then came true... and more. The revelations are so specific that even the most hardened skeptic will find it hard to put down.

Though it sounds like the plot of a Hollywood thriller, it's real. Written in a riveting narrative style, The Harbinger opens with the appearance of a man burdened with a series of messages he has received in the form of nine seals. Each seal unveils a prophetic mystery concerning America and its future that takes you on a prophetic journey that will change the way you see the world forever.

The Harbinger II will reveal mysteries of the Watchmen, the Half Moon, the Day of Tummuz, the Parchment in the Ruins, the Tree, the Inscription, the Image, the Eastern Gate, and so much more. It will even lead to mysteries concerning future events, such as the Window, the Island, the Other Mystery Ground, and the Prophecy.

The mysteries are opened up, as in the prophet's first appearance, through the giving of ancient seals, but also in dreams and through a little girl as mysterious as the prophet. In The Harbinger II, you will embark on an epic journey from the shores of New England, to the steps of the Supreme Court, to the towering heights of a Manhattan skyscraper, to a boat on the Hudson River, even to the White House and the pedestal of the Statue of Liberty. One thing is for sure, when you finish reading The Harbinger II, you will never see the world the same again.