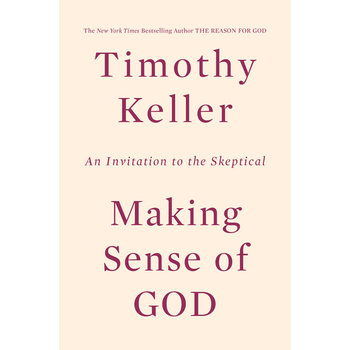 Making Sense of God: An Invitation to the Skeptical, by Timothy Keller

In this age of skepticism our society places so much faith in empirical reason, historical progress, and heartfelt emotion that it's tempting wonder: Why should anyone believe in Christianity? What role can faith and religion play in our modern lives?
In Making Sense of God, pastor and New York Times bestselling author Timothy Keller invites skeptics to consider Christianity is more relevant now than ever. As human beings, we crave meaning, satisfaction, freedom, identity, justice, and hope. We can't live without it. Christianity offers unsurpassed resources to meet those needs.
Written for both the ardent believer and the skeptic, Making Sense of God reveals the profound value and importance of Christianity in our lives.
Chapters include:
Part One: Why Does Anyone Need Religion?
- Isn't Religion Going Away?
- Isn't Religion Based on Faith and Secularism on Evidence?
Part Two: Religion Is More Than You Think It Is
- A Meaning That Suffering Can't Take From You
- A Satisfaction That Is Not Based On Circumstances
- Why Can't I Be Free to Live as I See Fit, as Long as I Don't Harm Anyone?
- The Problem of the Self
- An Identity That Doesn't Crush You or Exclude Others
- A Hope That Can Face Anything
- The Problem of Morals
- A Justice That Does Not Create New Oppressors
Part Three: Christianity Makes Sense
- Is It Reasonable to Believe in God?
- Is It Reasonable to Believe in Christianity?
- Only in God