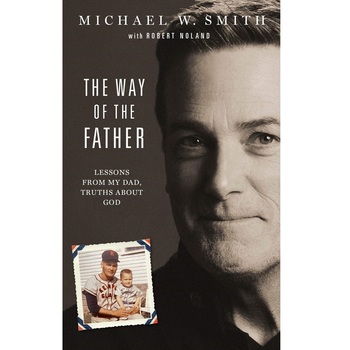 The Way of the Father: Lessons from My Dad, Truths about God, by Michael W. Smith & Robert Noland

Michael W. Smith, Grammy Award winning artist, delivers a deeply personal reflection on his father Paul Smith's legacy and the profound effect it had on every area of his life. As you see into the life and lens of his earthly dad, Michael W. Smith will reveal glimpses of a Father in Heaven that anyone can approach and experience.
Michael W. Smith has multiple accomplishments of his own. He's a multi-platinum artist, beloved songwriter, producer, best-selling author, actor, father of five adult children, and grandfather of sixteen. In The Way of the Father he takes readers back to the humble experiences of growing up in a small West Virginia town to share his father's story. Each chapter hones in on a quality and characteristic of his dad that came through obedience, and a sacrificial life, committed to serving his Abba Father, including:
- Finding truth in tragedy
- Loving unconditionally
- Persevering through pain
- Bringing righteousness to the world
- Influencing and inspiring generations
- Discovering identity and approval in Christ
Over the years, Paul Smith was a regular face in the crowd at Michael W. Smith concerts. He was a kind and joyful man who would sing, dance, and worship to the singer's countless hit songs, with his countenance beaming brighter than the spotlights on the stage, Paul would often introduce himself to those nearby and share how proud he was of his son. From the artist's early days as a struggling musician in Nashville to his death in 2015 (the year his son's album sales surpassed 15 million), Paul was always Michael's number one fan.
Michael reveals how his dad inspired and encouraged him using biblical principles and virtues. Now, Michael shares the same truths through stories, testimonies, origins of songs, and personal insights from his family life and thirty-five plus years of touring as a Christian artist. He hopes that by sharing his father's legacy, you will come to find that no matter who our earthly parents have been in our lives, our Abba Father will never fail us.
The Way of the Father will likewise challenge you in your faith journey so that one day you may hear, "Well done, good and faithful servant. You have fought the good fight, run the race, and have been found faithful"—just like Paul Smith heard the day he was called home to be with his Father.