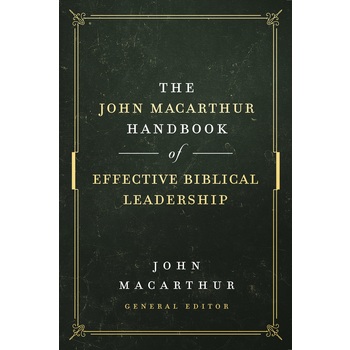 The Bible holds leaders and teachers of the Word to an extremely high standard, and for good reason. Shepherding God's people into salvation and spiritual growth is a huge responsibility, even more now than ever before. Churches today need leaders who will faithfully proclaim the Word of God and equip believers to live it out. Great leaders need great role models.
John MacArthur, bestselling author, has compiled the best-ever messages for Christian leaders from the internationally renowned Shepherd's Conference. Now available in a single volume, this resource provides John MacArthur's own candid and instructive writings alongside works of other proven ministry leaders usch as John Piper, Steven Lawson, R.C. Sproul, Ligon Duncan, and Al Mohler.
Pastors, elders, and leaders in church who desire to be more effective in spiritual leadership, this book will help them discover ways to:
- Guide others with integrity and conviction
- Deliver God's Word with passion and power
- Accurately interpret and apply God's Word
Fulfill your calling to lead with excellence when you accept the challenge to be a leader who follows God's standard both in ministry and personally.
Chapters include:
Part 1: The Shepherd as Preacher
- Preach the Word (1998) John MacArthur
- The Call of God (2002) Mark Dever
- Epitaph of a Faithful Preacher (2003) John MacArthur
- Bring the Book (2006) Steven J. Lawson
- Preaching and the Sovereignty of God (2004) R.C. Sproul
- Has Any People Heard the Voice of God Speaking...And Survived? (2008) Albert Mohler Jr.
- The Passion and Power of Apostolic Preaching (2007) Steven J. Lawson
- Preaching in the Spirit's Power (2010) Tom Pennington
- The Art of Crafting a Life-Changing Sermon (2010) Rick Holland
- Preaching As A Dying Man To Dying Men (2012) Alex Montoya
- Apollos: An Authentic Minister of the Gospel (2011) Albert Mohler Jr.
- A Tale of Two Preachers (2013) John MacArthur
Part 2: The Shepherd As Leader
- Humility: An Essential for Ministry (2005) John MacArthur
- Purity in the Camp (2007) Ligon Duncan
- Hallowed Be Your Name: The Leader On His Knees (2013) Tom Pennington
- A Leader Who Suffers Well (2001) John Piper
- A Ministry of Integrity (2010) John MacArthur
- Opposition and Hope (2007) Mark Dever
- The Leader and His Flock (2011) Rick Holland
- Guarding The Gospel (2009) Steven J. Lawson
- No Little People, No Little Sermons (2010) Albert Mohler Jr.
- Confronting Hypocrisy (2005) John MacArthur
- What Is Missing From Your Church Service (2014) Austin T. Duncan
- Fostering Fellowship (2014) John MacArthur
Part 3: The Shepherd As Theologian
- The Lord's Greatest Prayer, Part 1 (2016) John MacArthur
- The Lord's Greatest Prayer, Part 2 (2016) John MacArthur
- Adam, Where Art Thou? Rediscovering the Historical Adam in the Pages of Scripture (2013) William Barrick
- Why Every Self-Respecting Calvinist Must Be A Six-Day Creationist (2009) John MacArthur
- Faith Of Our Fathers: Do We Have the Same Gospel As the Early Church? (2012) Nathan Busenitz
- Mastering The Doctrine of Justification (2005) R.C. Sproul
- The Extent of the Atonement (2003) Phil Johnson
- The Great Commission As A Theological Endeavor (2014) Paul Washer
- Why Every Self-Respecting Calvinist Must Be A Premillennialist (2007) John MacArthur
- Heave On Earth: Exploring The Glories of The Eternal State (2013) Michael Vlach