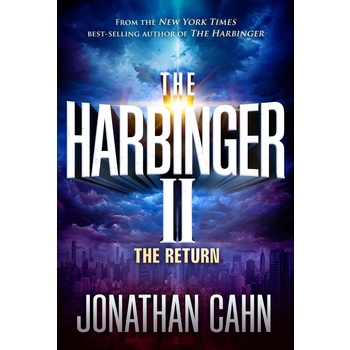 The Harbinger II: The Return, by Jonathan Cahn, Hardcover

Jonathan Cahn, 5-time New York Times bestselling author, returns with a follow-up to his 2012 groundbreaking book, The Harbinger. He always held off on writing a sequel to the book that was hailed as stunning, prophetic, mind-blowing, and astonishing, believing it was not the right time, until now. The Harbinger II will reveal what could not be revealed up until now, including the mysteries that couldn't be written into The Harbinger, the mysteries and prophetic harbingers that have manifested since the book's release, and the mysteries of what is yet to come. The Harbinger II takes the mystery to new dimensions and heights of revelation.
Questions that have been asked since the release of The Harbinger will finally be answered, such as:
- Has the revelation continued?
- Has the mystery progressed to a more critical stage?
- Have more harbingers now manifested on American soil?
- Is America closer now than ever before to judgment?
- Could this explain what has been happening in recent days?
- And what lies in store for the future?
The Harbinger II will reveal mysteries of the Watchmen, the Half Moon, the Day of Tummuz, the Parchment in the Ruins, the Tree, the Inscription, the Image, the Eastern Gate, and so much more. It will even lead to mysteries concerning future events, such as the Window, the Island, the Other Mystery Ground, and the Prophecy.
Just like The Harbinger, the revelations of The Harbinger II are real and manifesting through the events of our times. As with the first book, the mysteries are revealed through a narrative. So, The Harbinger II, brings the return of Nouriel, Ana Goren, and the mysterious figure known as the prophet. The prophet will resume the revelation where he left off, and open mysteries as stunning and mind-blowing as in the first book.
The mysteries are opened up, as in the prophet's first appearance, through the giving of ancient seals, but also in dreams and through a little girl as mysterious as the prophet. In The Harbinger II, you will embark on an epic journey from the shores of New England, to the steps of the Supreme Court, to the towering heights of a Manhattan skyscraper, to a boat on the Hudson River, even to the White House and the pedestal of the Statue of Liberty. One thing is for sure, when you finish reading The Harbinger II, you will never see the world the same again.