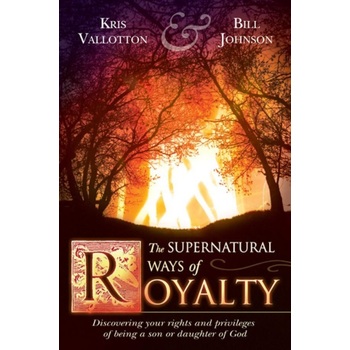 The Supernatural Ways of Royalty, by Kris Vallotton and Bill Johnson, Paperback

Explore your true identity as a child of the King of Kings. You are a royal heir to the eternal Kingdom of God.
Bill Johnson and Kris Vallotton deny the "pauper mentality" many Christians have and reveal your royal inheritance through Christ's ultimate act of redemption.
As a member of God's royal family, you can:
- Share the King's power of grace and mercy
- Think and act with His authority
- Reveal royal qualities for future generations
- Promote honor and humility--with confidence
- Cultivate His love for one another
The authors' personal, supernatural experiences will help you recognize your own royal status and inspire you to claim your personal inheritance gift from your Father—the King of Kings.
Chapters include:
Part I: Our Royal Call
- The Plight of Pauperhood
- Castle Tramps or Palace Princes
- Dungeons and Dragons
- A Royal Flush (by Bill Johnson)
- Lizards in the Palace
- Training for Reigning
- Guess Who Is Coming to Dinner?
Part II: Introducing The Attributes Of Royalty
- Superheroes in the Sanctuary
- All the Way Down to the Top
- Honor--The Yellow Brick Road
- Royalty Is Dying to Be Together
- Defending the Decrees of the King
- The Dogs of Doom Stand at the Doors of Destiny
Part III: Introducing the Authority and Responsibility of Royalty
- His Majesty's Secret Service
- Passing the Baton (by Bill Johnson)
- Building Strategic Alliances with Heavenly Allies
- Preserving the Planet