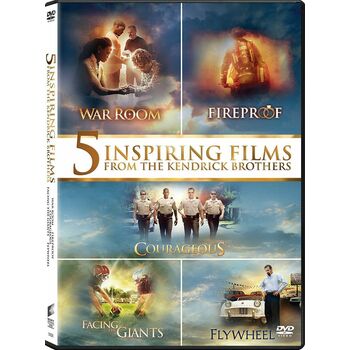 What began as a ministry effort of Sherwood Baptist Church (Albany, Georgia) launched an inspiring series of movies. Alex Kendrick and Stephen Kendrick continue to make faith-based films that speak to the heart and touch on issues they find valuable. Go back to the beginning and see how their filmmaking has progressed to communicate Christian messages to large audiences.
Flywheel (2003) 120 Minutes
Jay Austin wants to sell used cars in the worst way ... and that's exactly how he does business at his dealership. Promising much more than he can ever deliver, he'll do whatever it takes to sell a car. His manipulative ways permeate all of his relationships—even his wife and son know they can't trust him.
But as Jay works on restoring a classic convertible, he begins to see that God is working on restoring him as well. Coming face-to-face with the reality of how he truly conducts himself, Jay Austin begins the ride of his life as he commits to honoring God with his business, his relationships, and his life!
Facing the Giants (2006) 111 Minutes
With six straight losing seasons under his belt, football coach Grant Taylor is discouraged, to say the least. When his star player transfers to a bigger and better football program, his Shiloh Eagles lose the first three games of their current season, and the pressures he faces at home reach their peak, his discouragement turns to despair. And as Coach Taylor learns that a group of fathers are plotting to have him fired, he loses all hope in his battle against fear and failure.
But when an unexpected challenge helps him find a purpose bigger than just victory, Coach Taylor and the Eagles trust God to do the impossible and discover how faith plays out on the field – and off.
Fireproof (2008) 122 Minutes
As a firefighter, Captain Caleb Holt (Kirk Cameron) patterns his professional life after these words: Never leave your partner behind. But as a husband, he patterns his role in marriage after his own wants and needs. Arguments over jobs, finances, housework and outside interests are a regular occurrence in his home, so he is not surprised when his wife, Catherine, asks for a divorce.
As the couple prepares to enter divorce proceedings, Caleb’s father challenges his son to commit to a 40-day experiment: “The Love Dare.” Though reluctant at first, Caleb accepts the dare and gradually begins to realize that it is impossible for him to truly love his wife without the love of God.
Though Caleb desperately tries to win back his wife’s heart, Catherine resists his efforts, too hurt by his previous actions to give him a second chance. When Caleb reaches the end of his rope, only a miracle can revive the cooling embers of their marriage.
Courageous (2011) 129 Minutes
Four men, one calling: To serve and protect. As law enforcement officers, Adam Mitchell, Nathan Hayes, David Thomson, and Shane Fuller are confident and focused. Yet at the end of the day, they face a challenge that none of them are truly prepared to tackle: fatherhood.
While they consistently give their best on the job, good enough seems to be all they can muster as dads. But they're quickly discovering that their standard is missing the mark.
When tragedy hits home, these men are left wrestling with their hopes, their fears, their faith, and their fathering. Can a newfound urgency help these dads draw closer to God ... and to their children?
Protecting the streets is second nature to these men. Raising their children in a God-honoring way? That's courageous.
War Room (2015) 120 Minutes
Tony and Elizabeth Jordan have it all – great jobs, a beautiful daughter, and their dream house. But appearances can be deceiving.
Tony and Elizabeth Jordan’s world is actually crumbling under the strain of a failing marriage. While Tony basks in his professional success and flirts with temptation, Elizabeth resigns herself to increasing bitterness. But their lives take an unexpected turn when Elizabeth meets her newest client, Miss Clara, and is challenged to establish a “war room” and a battle plan of prayer for her family.
As Elizabeth tries to fight for her family, Tony’s hidden struggles come to light. Tony must decide if he will make amends to his family and prove Miss Clara’s wisdom that victories don’t come by accident.
- 5 movie collection
- Written by Alex Kendrick and Stephen Kendrick
- Directed by Alex Kendrick