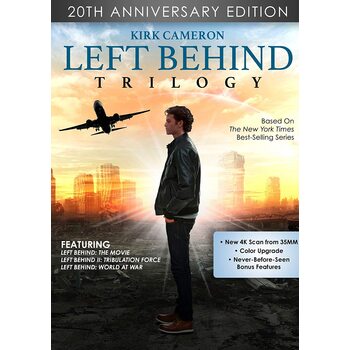 Celebrating the 20th anniversary of the Left Behind movie, this special trilogy set enhances the visual presentation with a new 4K scan from the original 35mm film. Witness the Hollywood premier special of the first Left Behind movie and watch lost and found scenes. Explore cast and crew interviews, and behind-the-scenes b-roll footage. Plus you can watch an interview with Kirk Cameron on sharing the gospel. This set includes the three films from the original Left Behind movies series:
Left Behind (96 minutes)
On an international flight, journalist Buck Williams (Kirk Cameron) and pilot Rayford Steele (Brad Johnson) discover that several passengers have simply vanished. Soon, it becomes clear that millions of people have disappeared off the face of the Earth, and they take it upon themselves to uncover the root of this perturbing mystery.
Left Behind II: Tribulation Force (94 minutes)
A week after the rapture, grief-stricken survivors continue to search for the millions of people who vanished into thin air. Chaos engulfs the world as suicide rates skyrocket, businesses are looted, and martial law remains in effect. A desperate world turns to United Nations President Nicolae Carpathia for guidance and reassurance. But as global events begin to take on strange significance, signalling the oncoming terror of years to come, a small group of rebels known as the Tribulation Force embarks on a dangerous mission to open the eyes of the world to the truth - Nicolae Carpathia is the Antichrist!
Left Behind: World At War (95 minutes)
Global icon and leader Nicolae Carpathia (Gordon Currie) has united the world in peace, bringing an end to the bloodshed that ruled since the beginning of time. American President Gerald Fitzhugh (Lou Gossett Jr.) survives a failed assassination attempt and discovers an underground sinister world.
- 2 DVD set
- 3 movies
- Based on the book series by Tim LaHaye and Jerry B. Jenkins
- 4K scan from 35mm film
- Hollywood premier special with lost and found scenes
- Unearthed cast and crew interviews
- Extra behind-the-scenes b-roll footage
- Kirk Cameron's interview on sharing the gospel
- B-roll of cast and crew filming scenes at Secret Hideout set
- Lou Gosset Jr. is a class act special