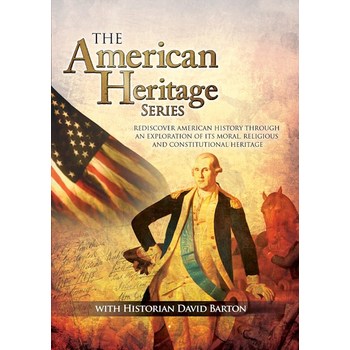 Learn about America's history from a providential perspective! Nineteen inspiring films cover the separation of church and state, the heroism of our founding fathers, the building of our nation's monuments, the civil rights movement, and more. This DVD series from David Barton will inspire viewers to learn the true story of our nation. This box set features 3 DVDs with 13 hours of instruction.

- A Christian Foundation
- Why History Matters
- Unearthing America's Christian Foundations: Part 1 and 2
- The Founding Fathers and Faith
- The Faith of our Founding Fathers: Parts 1 and 2
- Spiritual Beliefs and A New Nation
- The Ideas that Birthed a Nation
- Our Biblical Constitution
- Is America a "Christian Nation"?
- Church, State, and the Real First Amendment: Parts 1 and 2
- Religion, Culture, and Government
- Influence of the Bible in America
- How Pastors Shaped Our Independence Parts 1 and 2
- When Religion was Culture
- Faith in Our Early Courts
- Myths of Judiciary
- A Nation's Spiritual Past
- Evidence of America's Spiritual Heritage Parts 1, 2, and 3
- Four Centuries of American Education Parts 1 and 2
- Values, Freedom and Civil Rights Heroes
- Great Black Patriots
- From Bondage to the Halls of Congress
- The Civil Rights Movement
- The Assault on Judeo-Christian Values
- The Duty of the Free Citizen