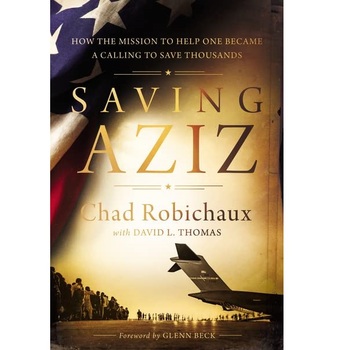 Chad Robichaux, former Force Recon Marine, reveals the incredible rescue missions that evacuated not only long-time comrade and interpreter, Aziz, but also over 17,000 Afghans and allies who were left in the clutches of the Taliban's violent regime as the United States military abruptly withdrew from Afghanistan.

During his eight deployments to Afghanistan, Chad Robichaux and his comrade and Afghan interpreter, Aziz, took part in over a hundred dangerous missions to eliminate High Value Targets (HVTs) in the Taliban's terrorist regime. During those years, Chad was welcomed into Aziz's growing family, and the two men developed a brotherly bond as they stood against the Taliban's violent oppression.

In April of 2021, fourteen years after Robichaux's final deployment, the Biden administration announced that the United States military would end its twenty-year occupation in Afghanistan and would pull its military forces from the country by the twentieth anniversary of 9/11. Immediately, Robichaux knew he had to save Aziz and his family. As he started to organize efforts, he realized a greater need to help more of the Afghan people he had come to know and respect. As the deadline for withdrawal drew near, he formed a coalition of nonprofits called Save Our Allies and created Task Force 6:8, which consisted of twelve former special operations veterans, to evacuate American citizens, green card holders, and special immigration visa (SIV) applicants out of the volatile country. They successfully extracted 12,000 evacuees in a period of ten days and took them to the United Arab Emirates. Then, by partnering with several other nonprofits, they continued to evacuate an average of fifty people per day over the next few weeks so that more than 17,000 were rescued, the largest number for any rescue group and second only to the United States military.

Following those rescue efforts, Robichaux carried out a two-man reconnaissance mission over the span of ten days that provided flight paths across the border into Tajikistan. Operating at night and tracked by the Russian KGB, they successfully evaded capture by the Taliban and Chinese special forces, and were the first on the ground providing real-time intelligence for outside intelligence agencies, which made way for additional evacuations.

Saving Aziz reveals the behind-the-scenes view of the evacuation efforts that saved thousands from the Taliban during a historic humanitarian crisis. In this gripping and eye-opening account, Chad Robichaux describes his experiences with the deep, rich, and complex culture of Afghanistan and its people; his direct interactions with those in the Taliban; his perspective on the twenty-year war that took place under four presidents; and his inside view of what happened in Afghanistan during the United States' hasty withdrawal.