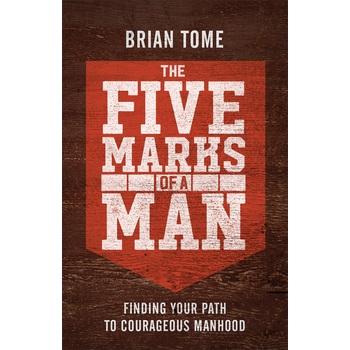 The Five Marks of a Man, by Brian Tome

When a boy goes from 17 to 18, he doesn't automatically become a man. What separates the men from the boys is they way he lives.
A boy lives day to day, wants to be MVP, plays, wants the reassurance of the crowd, and is a predator.
A man has a vision for his life, is a team player, works, has the courage to take a minority position, and is a protector.
There are five marks, distinguishing traits, that have defined all great men throughout history. Pastor Brian Tome draws from his own experience and the lives of others as he calls on men to examine themselves and take steps in the direction of the adventure of a fully realized manhood that honors God, respects women, elevates others, and works purposefully for an end greater than their own satisfaction or pleasure.
Chapters include:
Mark I: Men Have a Vision
- Boys Are Shortsighted, Men Play the Long Game.
- Boys Live for Today, Men Think Long Term.
- Boys Drift. Men Focus.
- Boys Look for Open Doors. Men Break through Barriers.
Mark II: Men Take a Minority Position
- Boys Want to Go with the Flow. Men Are Willing to Stand against the Tide.
- Boys Want to Fit In. Men Aren't Afraid to Stand Out.
- Boys Are Fractions. Men Are Whole.
- Boys Crave Independence. Men Embrace Interdependence.
Mark III: Men Are Team Players
- Boys Are Lone Wolves. Men Run in Packs.
- Boys Are Passive. Men Are Active.
- Boys Reject Authority. Men Respect Authority.
- Boys Hold Back Emotional Expression. Men Are Affectionate.
- Boys Make Each Other Comfortable. Men Make Each Other Better.
- Boys Tear Each Other Down. Men Build Each Other Up.
- Boys Live to Play. Men Play to Live.
Mark IV: Men Work
- Boys Don't Want to Work. Men Work.
- Boys Work to Stake Claims. Men Work to Experience God.
- Boys Act to Serve Themselves. Men Work to Serve Others.
- Boys Consume. Men Produce.
Mark V: Men Are Protectors
- Boys Are Predators. Men Are Protectors.
- Boys Want Their Pleasure Today Men Think about a Woman's Tomorrow.
- Boys Coast. Men Keep Pushing Themselves.
- Boys Spend to Zero on Themselves. Men Achieve Financial Health So They Can Give.
- Boys Passively Watch Others' Spirituality. Men Proactively Lead Others to True Spirituality.